Police kicked open an 84-year-old Oklahoma woman’s front door and pepper-sprayed her during a search for her son, who was being hunted after allegedly failing to stop at a stop sign.

Police in the city of Muskogee, near Tulsa, released body camera footage of the incident that took place at about 2.30am on 7 August.

The video shows an officer kicking the front door open, shouting commands and tasering Arthur Blackmon, who appears to be standing still with his hands up, holding a mobile phone. About 30 seconds after Blackmon is tased, officer Michelle Casady is heard telling Geneva Smith, who is backing away: “Turn around, face that way now, or I’ll spray you.” She directs a brief burst of spray at the elderly woman’s head, causing her to reel.

“Hey! My mother is 84 years old, motherf*cker!” Blackmon yells, as she falls to the ground and cries, “Help me, Jesus.” A few seconds earlier, Smith had refused to get on the floor and told officers, “I ain’t turning round.”

Officers were chasing the 56-year-old after he allegedly ran a stop sign, drove to his mother’s house and failed to obey instructions to stay in his truck, then dashed into the home and refused to come out, according to police footage.

The Muskogee Phoenix said that Smith, who is Black, was initially cited for resisting an officer, but the citation was dropped, while Blackmon was charged with drunk-driving, obstructing an officer, driving with a suspended license and illegally carrying a weapon.

“I just came out and asked them what was going on and they just pepper-sprayed me,” Smith told Fox 23 local news, adding that she was taken to jail, then the hospital after falling ill, and still felt pain in her eye more than a week later.

Rex Eskridge, the chief of police, told the station that the department released the footage to be transparent. “Videos can’t give you the full sense of what happened but at the same time they do either validate or expose any warts that you might have,” he said.

The department has allegedly launched an internal investigation to determine whether officers complied with policy. Police said in a statement that they used “non-lethal force” because the mother and her son repeatedly failed “to comply with lawful commands”.

A spokesman said that police entered the house only after repeatedly attempting to make contact, then hearing yelling and a cry of “call 911!” from inside, prompting concern for the residents’ safety, especially given that the truck they had chased was not registered at that address.

“We can’t ignore the fact that there was wrong on both sides,” said Derrick Reed, a former local NAACP president and current city councilman for the ward where the incident took place. He praised the police for releasing the footage and being responsive to the concerns of community “leaders”, who are now waiting for the results of the investigation.

Muskogee police made news locally last year when they pepper-sprayed an African American mentally disabled man during an alleged search for a missing person at a home in the city, and nationally when an officer fatally shot a Black man who was allegedly fleeing then stopped to bend over and pick up what appeared to be a gun in the road.

“We have worked in Muskogee to build relationships with our police department and so I can’t say that all the force is bad but that night was a horrible night,” Reed said.

“Looking at the video, anyone would think there could have been other avenues that the Muskogee police department could have taken that night so the outcome wouldn’t be so horrific. Anyone seeing the video has to put in their mind that whether she was Black or white she was somebody’s grandmother, 84 years old, and there were seven police officers in the room … the image that’ll never escape my mind is there was an 84-year-old woman, pepper-sprayed, and could we have done something differently?”

STOP, NO MORE! POLICE, PRISONS, AND THE AFRICAN AMERICAN COMMUNITY 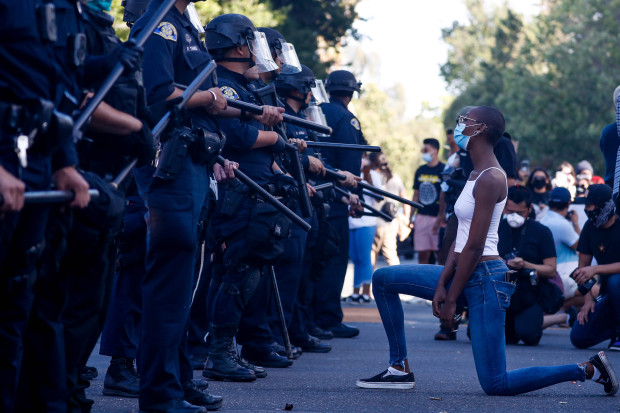