In Colombia, the month of May is African Heritage month. All over the country you can see and experience events which celebrate the rich history of the community, as well as dialogues on the current state of affairs.

The 21st of May, in particular, marks an important moment in the sojourn of the population; known as “Dia de la Afrocolombianidad,” it’s the day slavery was abolished in the South American nation in 1851. Yet, even with these holidays in place, the reality is that the Latin-American nation is rife with systemic and cultural racism–and the over weekend, thousands marched in cities across the country to call out the prevalence of racial discrimination and to demand for the social recognition of these issues.

A group known as Marcha de la Comunion Afrocolombiana spearheaded the nationwide demonstrations. Taking inspiration from the Black Panther Party and movements such as the Million Man March and Black Lives Matter, they put together a 10-point list of demands and called for millions to come out and march in cities including Cali, Buenaventura, Pareira and Quibdo. The organizers also used the hashtag #PorEsoMarchamos (this is why we march) to encourage unity, spread awareness, and give examples of how racism pervades Colombian society.

I went to downtown Bogota on Sunday to cover the local demonstration. I saw many women in attendance wearing braids and headscarves in celebration of their roots. Out of the estimated 1400 people, it was inspiring to see that the majority of the crowd were teenagers and young adults. Shouting a variety of call-and-response chants and holding up signs of their demands, what struck me most was the sight of the gathering in the capital. Unlike the coastal cities where the majority of the Afro-Colombian population resides, Bogota often seems very whitewashed and frequenting certain areas as a black person you can blatantly be profiled or made to feel uncomfortable. While there was a large turnout in each participating city, ending the series of demonstrations with the march in the capital seemed to be the perfect way to cap-off the weekend.

The most recent census records report that around 12% of the Colombian population identifies as black or of African descent, yet some estimate that it is actually up to 30% with a large percentage of the ethnic group not being documented or choosing to identity as mixed-race/other. The local media adds to the erasure by promoting a euro-centric beauty standards and stereotypical images of black people, and to this day blackface is a widely accepted form of entertainment.

In the hope to live up to a self-perception as a multi-cultural racial utopia, many shun recognition or discussion of race, leaving those whose experience discrimination and colorism regularly to be silenced or outcaste. Still, the reality is undeniable. A recent study conducted by the Anti-Discrimination Observatory of Cartagena found that employers are more likely to hire white or light-skinned Colombians for high-ranking jobs. It´s also be found that those with light skin earn twice as much as those with darker skin, and this is reflected in the fact that most impoverished areas of the country are home to mostly African descendants.

As leaders and organizers rise up in the Afro-Colombian community to have their needs and rights met, it’s amazing to see the interconnectedness of the respective struggles throughout the diaspora. From the U.S. to the Caribbean to South America, since Africans were brought to the shores of the Americas, we’ve been in a constant fight for freedom, justice and equal rights. Living in Colombia for over a year now, I can see there is much to be done in respect to racial injustice. But, as this past weekend has showed me, the fighting spirit for change that has helped African descendants all over to push forward, is undoubtedly here within the Afro-Colombian community. 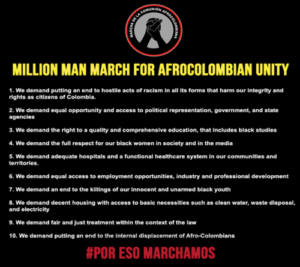