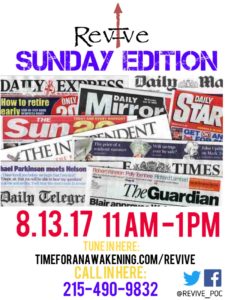 This episode on REVIVE is entitled the “SUNDAY EDITION” on #REVIVE we’ll be discussing trending topics, current events, and more! You don’t want to miss this conversation, join in on the fun!

Omar Tyree: Omar Tyree is a New York Times bestselling author, the winner of the 2001 NAACP Image Award for Outstanding Literary Work—Fiction, and the 2006 Phillis Wheatley Literary Award for Body of Work in Urban Fiction. He has published more than twenty books on African-American people and culture, including five New York Times bestselling novels. He is a popular national speaker, and a strong advocate of urban literacy. Born and raised in Philadelphia, he currently lives in Charlotte, North Carolina.

Margot Sandy: Margo Sandy is a Product Development Engineer, Amazon Bestselling Author, Owner of In The Now, LLC (an engineering consulting firm) and Co-Founder of 828 Movement, LLC. Margo and her friend developed this 828 Bracelet to honor the important historical events that happened on August 28th. It honors the lives lost along the way in the continued fight for equality and a hope for the future. With this 828 Bracelet that was just launched 15% of the Net Profits will go to Urban Area schools across the US. Their first donation will be in Birmingham, Alabama on August 28th. They have opened up their site for Pre-Orders and the product will in your hands in October!

It would be amazing to hear your perspective. So please call in we want to hear what you guys the listening audience out there have to say always. Once again this show is for the people. We here at REVIVE thrive off of communication. So call us at (215)490-9832  & follow on Twitter and Facebook @REVIVE_POC ! 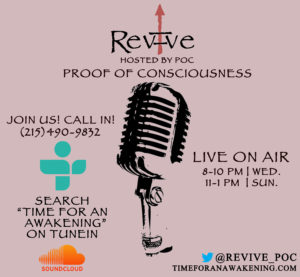