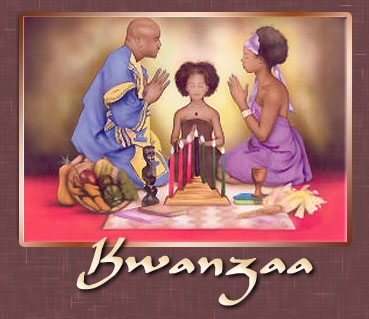 LET’S NOT ONLY CELEBRATE KWANZAA BUT ALSO LET’S PRACTICE AND LIVE IT!!!

Tonight on the Black Reality Think Tank radio program, we will discuss methods on ways to make this practice a REALITY.

Kwanzaa is an African-American and Pan-African holiday that celebrates family, community, and culture. It is observed from December 26 through January 1 and its origins may be found in the first harvest celebrations of Africa, from which this holiday takes its name. Kwanzaa is derived from the phrase, “matunda ya kwanza,” which means “first fruits” in Swahili, a Pan-African tongue that is the most widely spoken language of Africa. The first-fruits celebrations are recorded in African history dating back to Ancient Egypt and Nubia, with references, both ancient and modern, appearing in other classical African civilizations, such as Ashantiland and Yorubaland, and among societies as large as empires…
Kwanzaa was conceived and developed in 1966 by Dr. Maulana Ron Karenga, an author, and scholar-activist who stresses the need to preserve, continually revitalize and promote African American culture.